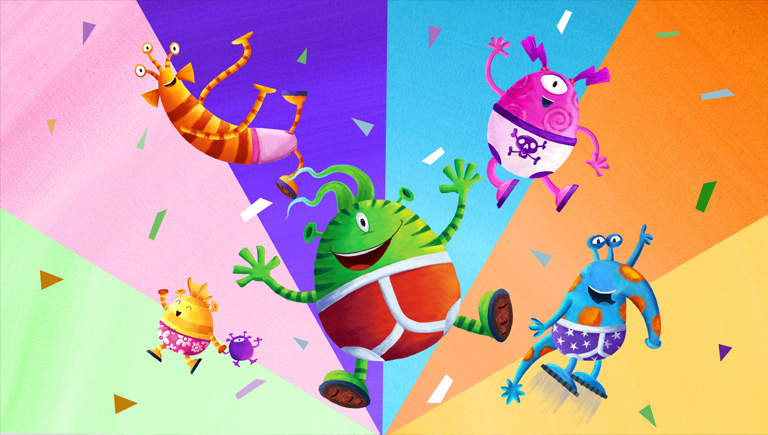 Aliens Love Underpants AND…, an adaptation of the award-winning children’s books by Claire Freedman and Ben Cort, is coming exclusively to Sky and the Sky Kids app this summer. The Sky Original Production, made by Tiger Aspect, will arrive on screens as the pants-loving aliens celebrate 10 years of zany fun and out-of-this-world adventures.

Based on the bestselling books, the series of 12 animations, each two minutes long, will star the pants-tastic aliens singing and dancing along to hilarious songs about cupcakes, spaceships, gobbledegook and more. With madcap lyrics and dance moves to join in with, kids aged three to six will love it.

Tom Beattie, head of animation and kids, Tiger Aspect, said: “As a parent, I know how much kids love the fun silly songs that they repeat again and again (and again!). We’re looking forward to making our own, using the cast of brilliant and beloved aliens from the world that Claire and Ben have created. The catchy songs and get-up-and-dance routines will make these aliens pop stars for pre-schoolers and parents everywhere will be humming their songs! ”

Aliens Love Underpants AND… joins Sky’s great line-up of kids’ programmes and channels, along with a host of other new shows including:

Lucy Murphy, head of kids content, Sky, said: “At Sky, we have the very best range of entertainment for kids and their families. We are thrilled to be working with Tiger Aspect to bring Aliens Love Underpants to rowdy life, to be adding great British comedy from Darrall Macqueen, and mesmerising mini-docs from Miniteve – we know kids will love these new shows.”

Sky is home to some of the most-watched kids’ shows in the UK and Ireland. With over 4,500 episodes of kids’ favourites, from Sky originals such as Morph and Big Cats: Wild Files, to popular YouTube phenomenon Little Baby Bum, eOne’s Peppa Pig and Nick Jr’s Paw Patrol. With over 15million weekly views across all our platforms, Sky offers kids’ favourites on demand via the dedicated Sky Kids app and kids’ sections on Sky Q, Sky+, Sky Go, and the online streaming service NOW TV with a NOW TV Kids Pass.

Aliens Love Underpants AND… is in production and will be available for Sky customers this summer. All animation will be produced in-house at Tiger Aspect, led by head of animation and kids, Tom Beattie (Mr Bean, Charlie and Lola, Tinga Tinga Tales). David Schweitzer (Charlie and Lola, Mike the Knight and Q Pootle 5) will compose the songs.