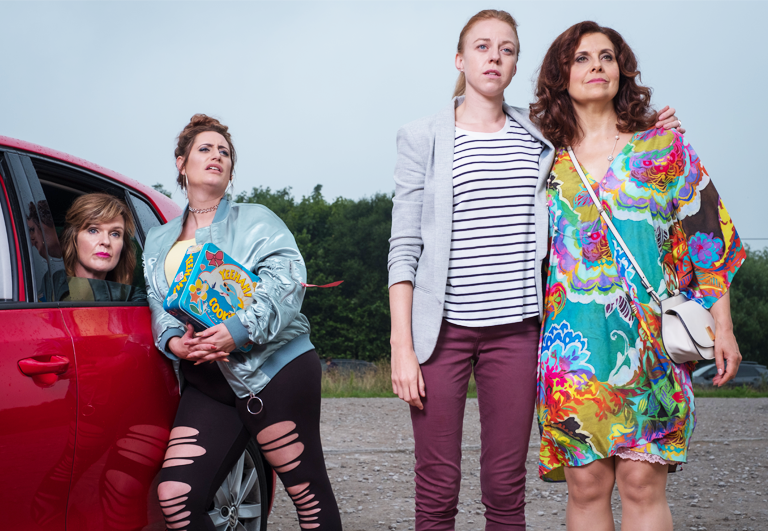 BBC Two takes sitcom The Other One to series

BBC Two has commissioned The Other One to series following its pilot debut in September last year.

The Other One is a comedy about what happens when you discover your dead Dad has a secret family and you now have a brand new sister.
Cathy’s dad just died. Colin was the most caring, generous and funny man you’d ever meet. He was a brilliant husband and father, and now he’s bloody died. Kicking the bucket was the most selfish thing he ever did.

But Colin had a massive secret. He had a mistress; which is weird because people with a subscription to ‘Which?’ magazine aren’t usually risk-takers. And not only that, Colin had another daughter with this woman – born exactly a week after Cathy. To cover his tracks Colin decided to call both daughters Catherine, so as to reduce confusion and getting caught (you know, like how married men buy their lover their wives’ perfume – but way worse). His other ‘family’ – Marilyn and Cat – live 13 miles away in a neighbouring town and knew him as an unreliable but sporadically wonderful sh*t of a dad.

Neither Cathy nor Cat were aware the other existed until Colin’s funeral. And this is where everything kicks off – the Cat is well and truly out of the bag.

The Other One stars Siobhan Finneran (Downton Abbey, Happy Valley), Rebecca Front (The Thick of It, War and Peace), Ellie White (Inside No 9, The Windsors), Lauren Socha (Misfits, Catastrophe) and Amit Shah (Hospital People, Stag, W1A).

Show writers Pippa Brown and Holly Walsh said; “What an absolute honour and privilege to be able to work with these four fantastically funny, incredibly talented women (ditto one man) for a full series. We love Siobhan, Rebecca, Ellie, Lauren and Amit so much so cannot wait to start thinking of brilliant things for them to get up to. P.S. please can all children of dead polygamous men get in touch with us and tell us their stories as a matter of urgency.”

Executive producer for Cave Bear Productions, Ben Cavey, said: “The Other One is a fantastically funny and charming show with a great story at the heart of it. We are very happy to once again be making comedy for BBC Two which continues to be the home for a lot of the UK’s best comedic talent. It’s absolutely right that Holly and Pippa, as two of the UK’s leading comedic lights, should be joining BBC Two’s impressive line-up of comedy brilliance.”