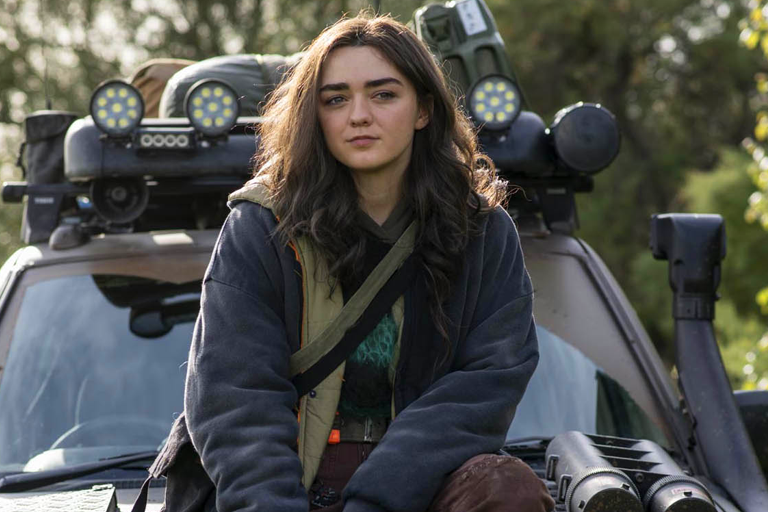 Sky has today released the first look image of its upcoming original comedy Two Weeks to Live as production begins in Kent and London.

The 6×30 series which is being produced by Kudos, part of Endemol Shine UK is due to air on Sky One and streaming service NOW TV in 2020.
Starring Emmy Award® nominee Maisie Williams (Game of Thrones), Two Weeks to Live tells a comic tale of love and revenge born from a seemingly harmless prank that goes terribly wrong.

Created and written by Gaby Hull (Cheat), the six-part series will be produced by Kudos, part of Endemol Shine UK, and revolve around Kim Stokes (Williams), a strange young misfit who was just a little girl when her father died in murky circumstances. Following his death, her mother Tina whisked her away to a remote rural life of seclusion and bizarre survival techniques.

Now all grown up, Kim sets out into the real world for the first time to begin a secret mission of honouring her father’s memory. Meanwhile, socially awkward Nicky (Rizwan) isn’t good at impressing girls, and when Kim walks into his and brother Jay’s (Modak) local pub, it sets in motion a chaotic series of events that puts all their lives in danger. Who would have thought a few drinks and an ill-judged prank could go so violently wrong?

Tina arrives in search of Kim and the unlikely crew soon find themselves on the run from murderous gangsters and the police with a massive bag of stolen cash. But Kim is no ordinary fish out of water – she’s more like a great white shark who knows how to strip a Smith & Wesson SDVE pistol in 6 seconds flat and skin a deer to make a sleeping bag whilst perfectly reciting the lyrics to ‘I Will Survive’. With her in their team, they might all just get out of this alive.

The series was commissioned by Zai Bennett, Managing Director Content, Sky and Jon Mountague, Director of Comedy, Sky. The series will be executive produced by Phil Temple from Kudos, produced by Charlotte Surtees and directed by Al Campbell. It will be distributed by Endemol Shine International.

Two Weeks to Live is one of many recent notable commissions as Sky continues to invest in original productions. Sky has recently committed to more than double its investment in original drama, comedy and documentary through Sky Studios, the commissioning and production arm of Sky. Sky Studios brings to screen unique stories from the very best talent in Europe and is the creative home of Sky’s award-winning and much-loved Sky originals.

Sky originals current roster includes Code 404 with Stephen Graham and Daniel Mays; Intelligence fronted by David Schwimmer and Nick Mohammed; Hitmen, Mel and Sue’s first scripted comedy series and Breeders with Martin Freeman. 2019 has been a record year for Sky originals with 10 time Emmy-winning Chernobyl becoming the most watched original ever with over 4 million viewers of the season finale. And away from the screen, Sky secured a record BAFTA haul with seven awards.