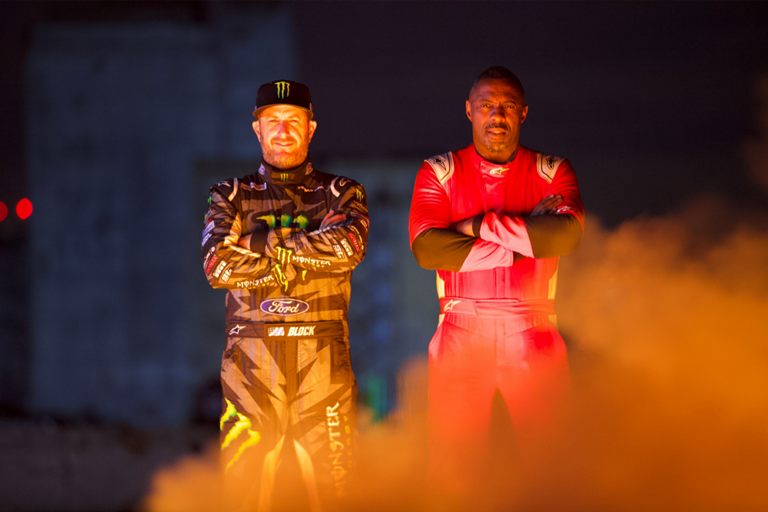 Idris Elba and Ken Block to Compete in Jaw-dropping Stunt Series for Quibi: Elba vs. Block

One of Hollywood’s biggest stars, Idris Elba, and one of the planet’s hottest drivers, Ken Block, are going head to head as they pit a variety of cars against each other through increasingly outrageous stunts to prove whose car, and which driver is the best.

Their hilarious and action packed rivalry will be documented in a series shot in London’s Docklands over eight episodes that will feature eight jaw dropping stunts – like the “Wall of Death,” the “Car Tightrope” and the “Flaming Obstacle Course.”

Elba, best known as a Golden Globe and SAG winning actor as well as a director and musician, is also a thrill seeker who pulls off his own stunts, has fought as a kickboxer, drag raced and broken land speed records.
Block is one of the biggest names in motorsports, a professional rally driver known for his extreme choreographed driving stunts. His viral ‘Gymkhana’ video series received over half a billion views on YouTube and pushed the boundaries of automotive filmmaking.

“Ken is my driving hero… I’ve never worked with a driver as skilled as him so I’m a little intimidated by his talent. I love challenges, I love speed and I’m a ‘wheel man’ so let’s see how this plays out.”

“I’m really excited to be partnering up with Idris on this new show. I’ve admired his work for years and he has a reputation as a man who likes to go fast behind the wheel of a car, so I think we’re going to have a lot of fun with these challenges that the producers have lined up for us.”

“Being one of the first production companies to work with such an innovative platform is allowing us to rip up the rule book in terms of storytelling which is incredibly exciting. Having worked with Idris previously on several motorsport projects we know he has a genuine passion for speed – so this is going to be an adrenaline fuelled ride from start to finish.”

Elba vs. Block is a co-production between Workerbee (part of EndemolShine UK) and Green Door Pictures for Quibi.