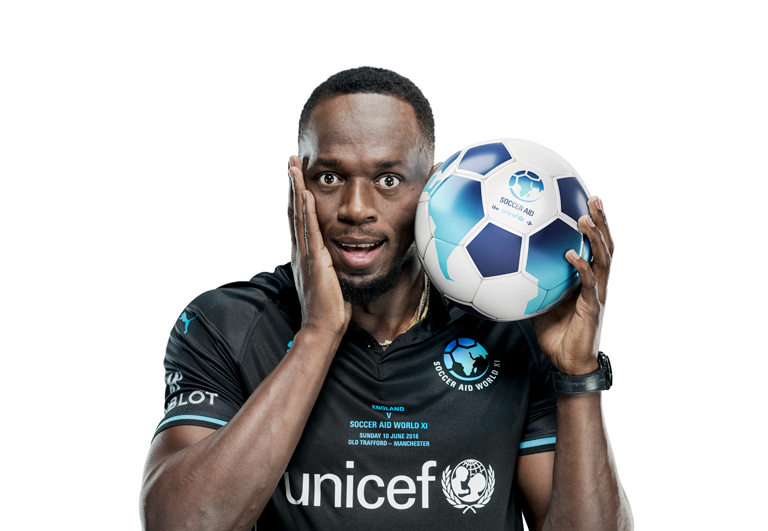 ITV has joined forces with Unicef, the world’s leading organisation for children, to make the pro-celebrity football match Soccer Aid for Unicef an annual charity campaign from Summer 2018 until at least 2020. The new initiative was announced today by Olympic hero Usain Bolt and global popstar Robbie Williams. Williams is a Unicef UK Ambassador who co-founded and launched Soccer Aid in 2006.

ITV today announced the three-year commission with Initial Productions to screen the charity celebrity match in primetime during the summers of 2018, 2019 and 2020. As well as the new multi-year contract, the broadcaster will support Soccer Aid for Unicef across its platforms and programmes, part of a wider concerted effort from all stakeholders involved in the project, to make the event the biggest and best yet, a game like no other.

To date, previous Soccer Aid matches have raised over £24million for Unicef. The new annual format has ambitions to significantly add to this total through an annual programme of nationwide fundraising activities in local communities and UK workplaces. These initiatives will include a nationwide schools’ activity programme.

A brand-new Soccer Aid for Unicef brand identity has been revealed today, designed by ITV Creative and Conran Design Group, for the event which will take place at the Theatre of Dreams, Old Trafford on Sunday 10 June 2018 – just four days before the FIFA World Cup in Russia begins.

Soccer Aid for Unicef is the original pro-celebrity football match that has already featured A-list stars such as Will Ferrell, Woody Harrelson, Mike Myers and Niall Horan plus footballing legends including Maradona, Zinedine Zidane, Luis Figo and Ronaldinho. The appeal films shown during the programme have featured names such as David Beckham, Rosie Huntington-Whiteley, Keeley Hawes, Eddie Izzard and Keira Knightley.

The multi-stakeholder project will be run by newly-formed Soccer Aid Productions, a joint venture between Unicef UK and Triple S Events, part of the Triple S Sports & Entertainment Group. Both parties are working in collaboration with producers Initial, part of EndemolShine UK.

ITV Chief Executive Carolyn McCall, who is a Unicef UK vice-president, said: “Soccer Aid for Unicef will see the worlds of celebrity and sport coming together for this exciting, unmissable event on ITV this summer. It’s great news that ITV Director of Television Kevin Lygo has extended our commissioning commitment to make this unique match an annual fixture for viewers.

“In broadcasting this brilliant event, ITV is using its reach as the UK’s most watched commercial broadcaster to not only help raise funds, but to also raise awareness of the vital work that Unicef does around the world to help children in danger.”

Unicef UK Executive Director Mike Penrose said: “The rebranding of the project and renewed commitment from ITV to Soccer Aid for Unicef will ensure that millions more pounds can be raised in the UK for vulnerable children – both at home and abroad. Our new Soccer Aid for Unicef schools’ programme will help encourage the next generation of children to get involved in activity, inspired by their heroes and become aware of other young people less fortunate than themselves.”

Mirella Breda, Managing Director, Initial said: “Initial are very proud to have been the Soccer Aid producers since it was first broadcast in 2006 so to see it become an event on this scale is fantastic. Soccer Aid for Unicef is without doubt a game like no other and we’ve got some exciting plans in store for ITV viewers on June 10th.”

The Soccer Aid for Unicef programme is an Initial production for ITV. The executive producer is Richard Greenwood. TX is Sunday 10th June 2018 on ITV.