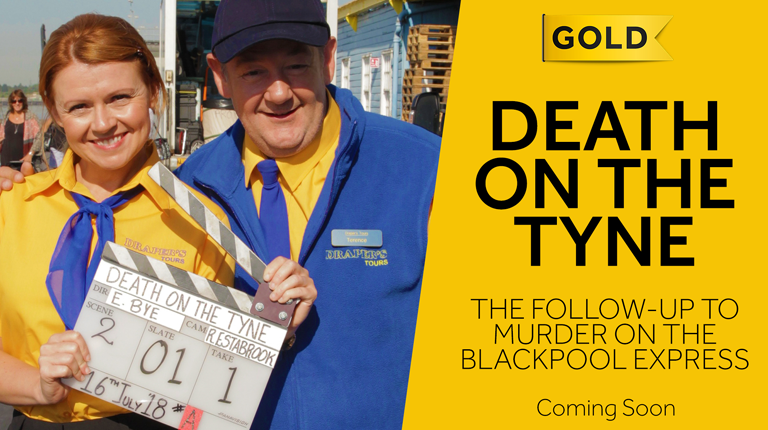 Death on the Tyne airs on Gold later this year

Building on the incredible success of UKTV Original Murder on the Blackpool Express in 2017, Gold is bringing back Johnny Vegas and Sian Gibson’s much-loved characters Terry and Gemma in Death on the Tyne (1×120’). The pair will reunite with a whole host of comedy greats as they embark on a brand-new murder mystery caper.

Johnny Vegas and Sian Gibson quipped: “The script is just a wonderful flowering garden of Cook’s writing and we are just two happy bees dancing in among the nectar of blood, betrayal and nautical based murder.

We are loving once again being the Kylie and Jason of budget travel slaughter. (Sian nodded.)”

Jason Cook’s first outing Murder on the Blackpool Express was the most watched show ever on Gold with 1.8 million viewers*.
Pete Thornton, senior commissioning editor said: “It’s a real joy to be taking to the high seas (or at least the Tyne Estuary) with the hugely talented team at Shiny Button (this time with award winning director Ed Bye at the helm). Jason Cook has come up with a jewel of a script, toiling through the long winter months to create another complex, properly funny and hugely satisfying feature length murder mystery – packed with characters to die for, or indeed be killed by.”

Gerald Casey, channel director for Gold added: “We’re delighted to be reuniting Sian and Johnny for another hilarious and thrilling whodunnit, alongside an equally stellar cast. Murder on the Blackpool Express was overwhelmingly loved by the Gold viewers and these shows embody our commitment to new, exciting and original comedy alongside our familiar favourites.”

Andy Brereton, Exec Producer for Shiny Button added: “I cannot wait for viewers to see Johnny, Sian and Shelia back to their sleuthing best, in a cracking new mystery by Jason Cook. I like to think that if she were still alive this would be Agatha Christie’s favourite show, after Taskmaster”.
Death on the Tyne will air later this year on Gold alongside recently announced UKTV Original My Favourite Sketch, hosted by Sally Phillips.