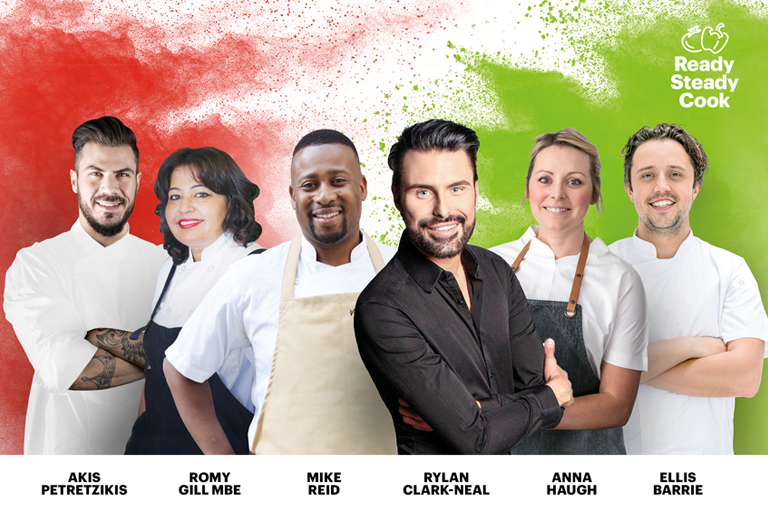 Cookery hit Ready Steady Cook is set to return to BBC One Daytime in 2020, with new host, Celebrity MasterChef finalist Rylan Clark-Neal. The new series will offer up fresh challenges to put the next generation of chefs through their culinary paces.

Ready Steady Cook, produced by Remarkable TV (part of EndemolShine UK), will feature a diverse range of exciting talent from the culinary world, offering the new line-up of chefs a platform to showcase their cookery prowess against the clock on BBC One. Chefs signed up for the series so far include Mike Reid, Romy Gill, Akis Petretzikis, Ellis Barrie and Anna Haugh.

The show will reflect contemporary food themes, from cooking on budget to eating healthily, managing food waste to feeding the whole family, mirroring the changes in food and British cooking over the past decade.

In every episode two contestants are each paired up with a chef, going head to head in the newly designed Ready Steady Cook kitchen. But in this new series, the chefs will now face two different taste tests and the clock is always ticking! In the first challenge, each contestant comes armed with their bag of ingredients, all bought within a £10 budget. They’ll have just 20 minutes to create delicious, surprising and inspiring dishes ready to wow the discerning studio audience. And with further format twists along the way, from wildcard ingredients to chef timeouts, Rylan always has a surprise in store.

The revamped second challenge is even faster, as each pair has just 10 minutes to create yet more amazing dishes, this time based on audience ingredients cards. With unlikely combinations always a possibility, the pressure is on to create yet more flavour sensations. And, in true Ready Steady tradition, the casting vote on the show’s winner will be left to the audience who’ll have their say on the best dishes, by voting with the iconic red tomato and green pepper voting cards.

“I’m so excited that Ready Steady Cook is finally coming back to our screens. To be asked to host such an amazing show for the BBC is such a privilege. After making the finals of Celebrity MasterChef I know how tough cooking under pressure can be. I’m sure that the mix of new challenges, fantastic chefs and enthusiastic cooks will be a recipe for success, maybe with the odd disaster! I can’t wait to get in the kitchen!”

“Ready Steady Cook is a celebration of the much loved BBC One Daytime show, reimagined for contemporary Britain. The premise of healthy, aspirational food being prepared against the clock will be familiar to the audience, as will the iconic red tomatoes and green peppers! This will be a series for the modern day featuring a brigade of exciting new culinary talent and with Celebrity MasterChef finalist, Rylan at the helm, a teatime treat for a whole new generation of viewers.”

“We’re absolutely thrilled to be bringing back such an iconic favourite. Ready Steady Cook was a staple ingredient of TV viewing for so many years and our refresh will bring it right up to date, while keeping the essence of the much-loved format. Rylan is the perfect host to bring the series back and the show promises to be the perfect mix of culinary inspiration and fantastic entertainment.”

Ready Steady Cook (20×45) was commissioned for BBC One by Carla-Maria Lawson, Acting Head of BBC Daytime and the Commissioning Editor for BBC Daytime is Lindsay Bradbury. Executive Producer for Remarkable TV is Cat Lawson.

The new series will be filmed and produced in Glasgow.