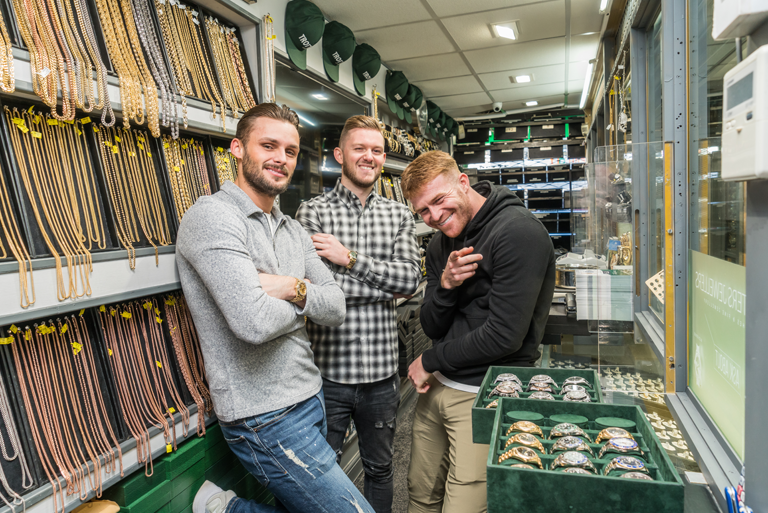 Behind the bling at one of London’s most popular jewellers

Shine TV, part of EndemolShine UK, has been commissioned by Channel 4 to make a one-off documentary that will see cameras go behind-the-scenes at one of London’s best-known independent jewellers.

Trotters Jewellers in Bethnal Green is a destination for big-ticket bling. Whether it’s for a ramped-up Rolex or a diamond encrusted pendant, this is a place where people come to flash their cash. And there isn’t any wild request that can’t be designed and custom-made by the expert team.

Family owned and run for nearly 30 years, the responsibility and ownership has recently passed on to 26-year-old Judd. He runs the shop with his two school mates, Alex and Kallum – the modern day Del Boys of the East End of London.

Now, the most famous urban jewellery shop in Britain is opening its doors for this this eye-popping programme where viewers will see the Trotters team design a commemorative piece for a current world champion boxer, a brick layer who buys a £9k watch, a boyfriend buying a diamond necklace as a way of an apology and much more. The team also travel to New York to get ahead of the trends and also meet jeweller to the stars, Richie Rich.

“We feel privileged that the boys have let us into their charming, funny world of East End clientele. It’s joyful to watch their unique sales tactics and fascinating to see the jaw-dropping amounts people can spend on a watch or pendant.”

“This will offer insight into one of the most talked about treasure troves in Bethnal Green. I’m sure the Trotters’ dynamic and off the kerb selling techniques to their eclectic clientele will both delight and engage the viewer. “

The episode will be narrated by Dani Dyer.