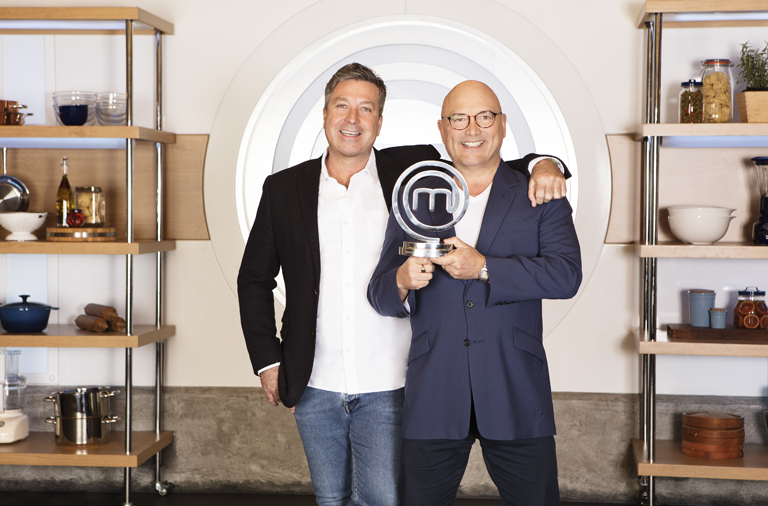 Celebrity MasterChef spices up the kitchen for its 14th series

BBC One’s Celebrity MasterChef is firing up for some hot kitchen action this summer. Putting their best culinary cooking foot forward is an eclectic who’s who of show business, drama, design, singing, and sport, all jostling for a starring role in the competition and aiming for a shot at becoming Celebrity MasterChef Champion 2019.

Once again MasterChef judges, John Torode and Gregg Wallace preside over the cooking contenders to whittle down the 20 celebrity contestants across six weeks, in the Shine TV (part of EndemolShine UK) produced series.

“This Celebrity MasterChef has all of the right ingredients for a series full of entertainment, pressure and fun. Once again we have a brilliant variety of different characters and there will be some surprises along the way as they are put through their paces and pushed to their limits.”

Over six weeks and 18 programmes the celebrities battle to take the trophy and become Celebrity MasterChef Champion 2019. The first four weeks whittle the celebrities down to those entering the semi-finals.

The first 60-minute episode of each heat week sees five new celebrities enter the kitchen and take on an invention test. With limited ingredients, they are challenged to create a firm favourite from scratch including a pizza, burgers, a curry and sausages. Then thrown in at the deep end as they head to a professional restaurant kitchen to prepare dishes for the paying public. Will they sink or swim under the watchful guidance of acclaimed chefs, we discover who can cut the mustard before they head back to the MasterChef kitchen to prepare a dish of their design for John and Gregg. At the end of this one contestant is sent home.

The four remaining celebrities return the following night for an exciting 60-minute episode featuring two huge challenges that test their ability to work under pressure together. The first is the Pairs Challenge where the celebrities are split into teams of two. Each team is tasked with cooking the same dish-however there’s a catch as there is a wall that divides the team members through which they must clearly communicate instructions in order to cook identical dishes in taste and appearance. The next test is the terrifying Mass Catering Challenge. Celebrities face the hungry hordes of diners at a range of pressurised, busy and time-sensitive venues – from the iconic ZSL London Zoo, the historic Ford Factory in Dagenham, the Hendon Metropolitan Police Training Centre and back to school at the Elizabeth Garrett Anderson Girls School. The celebrities work through each other’s strengths and weaknesses and form bonds across these two tough challenges.

In a third 30-minute episode, it’s back to business when the celebrities must put any allegiances aside and return to the MasterChef kitchen to battle for a place in the semi-finals. The four aim to cook a faultless two courses for John, Gregg and a table of guest critics. They include past Celebrity MasterChef champions– reigning winner John Partridge and past winners Angellica Bell, Alexis Conran, Lisa Faulkner, Ade Edmondson, Sophie Thompson and Phil Vickery – as well as former finalists Spencer Matthews, Martin Bayfield, Rylan Clark-Neal and the Rev. Richard Coles. At the end of this two celebrities are sent home and the remaining two become Semi-Finalists.

The successful contestants and this year’s semi-finalists tip headlong into challenges that draw on skills they have learnt during their time in the Heats and their ability to keep creating and cooking to stay in the competition. All eight semi-finalists come together for one almighty challenge to celebrate the Coastguards who safeguard one of the busiest shipping channels in the world at Dover. They return to the MasterChef kitchen to cook in challenges that include dishing up for three of the UK’s most renowned Restaurant Critics, William Sitwell, Grace Dent and Jimi Famurewa. For those that make it through they will also have the honour of cooking the dishes of world-renowned chef and food writer Yotam Ottolenghi.

The Finals week has some surprises in store as the contestants continue their stellar culinary journey. En route the final three have the opportunity to cook at the daunting Chef’s Table. This year they are given access to the kitchen of MasterChef: The Professionals judge Monica Galetti, Mere. They will cook her dishes to serve to a table of the UK’s most revered and respected chefs; one Michelin-starred Ollie Dabbous, Lisa Goodwin-Allen and Jun Tanaka alongside Robin Gill and two Michelin-starred Daniel Clifford.

Finally, they return to the MasterChef kitchen to cook for one last time. The three-course meal the three finalists cook for John and Gregg has to display every ounce of passion and food knowledge they have gathered over the six weeks in order for one of them to take the trophy and become Celebrity MasterChef Champion 2019.

“This year we’ve really put the Celeb’s through their paces with some really exciting new challenges and world class chef guest judges. The series has it all – commitment, passion, plenty of laughs and entertainment and some really incredible food – cooked by the most unlikely of people. It’s been a joy to produce and I can’t wait for fans of the show to see it.”